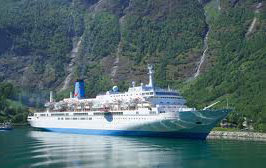 On the Caribbean island of Dominica, police entered a cruise ship and arrested two men from the U.S. The two men were from California and were passengers on the gay cruise. Local police said they boarded the ship because of reports of indecent exposure. Sex between two males is not legal in Dominica.

The police announced that the two men had been arrested for buggery, as well. That term is the equivalent to sodomy in Dominica said authorities. The two men were identified as Dennis Mayer and John Hart.

Police said that someone on the dock had seen the two men having sex onboard the ship. The two were charged by the police and faced a Thursday appearance in front of a local magistrate. If they are found guilty of indecent exposure, they could face six months in prison and a fine of up to $370 each.

The ship had arrived in Dominica after departing three days prior from Puerto Rico and has over 2,000 passengers. The ship departed without the two passengers for St. Barts.

Atlantis Events, a company from California that specializes in organizing gay travel, planned the trip. Rich Campbell, its president, was aboard the cruise and thought the two passengers would be released.

A pastor at a Baptist Church on the Island praised the police for their work. Many conservative islands such as Grenada and Jamaica have been upset by the larger presence of gay cruises in the Caribbean.

yieldwatch Trading Down 8.6% Over Last 7 Days