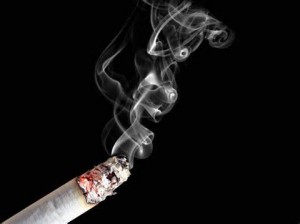 Close to 1 out of every 10 survivors of cancer report smoking years after being diagnosed, indicates a new study done by the American Cancer Society.

Researchers reviewed data on 2,940 patients 9 years after being diagnosed. More than 9% of them were smokers within the last 30 days from being surveyed. Of these patients, more than 83% smoked daily, averaging close to 15 cigarettes a day.

The research included patients with the 10 types of cancer that are the most common: bladder, breast, prostate, melanoma, uterine, colorectal, kidney, lung, ovarian and Non-Hodgkin Lymphoma.

The rate of smoking that was the highest was in patients who had been diagnosed with cancer of the bladder, which was 17.3% and cancer of the lung at 15%. Both of those cancers are smoking related.

In addition, more than 88.5% of those currently smoking quit prior to being diagnosed.

There were a number of sociodemographic factors analyzed amongst the patients.

Survivors were more apt to smoke if they were female, younger, less educated, drank more alcohol and lower income.

The research suggests a lack of intent to stop smoking in patients who are older, which could suggest the patient does not believe the troubles of trying to stop smoking are worth the gains in life expectancy or quality of life.

Researchers said that future studies needed to examine the value of psychosocial variables along with their relationships with current smoking as well as motivation to stop.

People who smoke heavily after they have been diagnosed might require a more intense form of treatment that addresses specific types of psychosocial characteristics like belief of fatalism and perception of risks that might influence the motivation to stop smoking.