Hospitals Having Battle with Antibiotic Superbugs 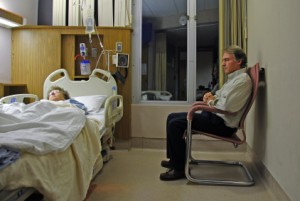 Across the U.S., one patient in 20 at hospitals picks up an infection, with some being very hard to fight. The infections are ones patients did not have when they checked into the hospital and some are caused by the very dangerous “superbugs” that have become harder and harder to treat.

The increase in superbugs as well as the increase in pressure from insurers and the government has cause hospitals to attempt various new approaches to try to stop the spread of the infections.

Hospitals have machines that better resemble those used as robots on Star Wars that emit hydrogen peroxide or ultraviolet light. Bed rails made of copper that are germ resistant, IV poles and call buttons that are made of the same metal. Curtains, linens and wall paint that are all antimicrobial.

While the previously mentioned products can help keep a room clean and sanitized, their impact remains debatable. No evidence that is widely accepted shows that these new products have prevented any infections or deaths.

While at the same time, insurers have pushed hospitals to have better results and the Medicare program of the government has pushed to stop paying for certain types of infections that a patient catches while at the hospital.

The infections at those hospitals have been linked to more than 100,000 deaths annually and increase medical costs by up to $30 billion each year. Last month the Center for Disease Control sounded a warning alarm over what they labeled “nightmare bacteria” that was resistant to one type of antibiotics, which is still rare, but was found last year in more than 200 hospitals.