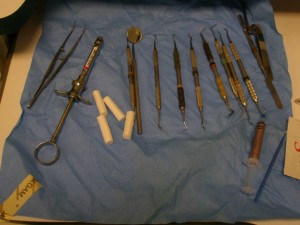 The Department of Health in Tulsa, Oklahoma is warning more than 7,000 patients from a dentist that they might have been exposed to Hepatitis B or C or HIV from poor practices of sterilization.

Dentist and oral surgeon Dr. Wayne Harrington a practices in Tulsa and is currently under investigation by the dental board of Oklahoma; the bureau of narcotics for the state; and the DEA because of recent patient that had been at his dentist office had tested positive for HIV and hepatitis C.

After hearing about the patient that was infected, the Board of Dentistry of Oklahoma conducted an on-site inspection of the practice of Dr. Harrington March 18. The inspection is alleged to have found a number of problems that included daily use of instruments that were rusty on patients that were known to have infections and applying bleach to wounds until the wound became white.

Repeated calls to the dentist’s office were forwarded to a phone operator who said the clinic did not take voicemails. The phone operator said that patients had been sent to a new clinic, however would not disclose which clinic it was or what its name was.

The Board of Dentistry said that the incident was made even worse since the dentist had been a provider for Medicaid and that meant the client base had a higher proportion of his patients with hepatitis or HIV.

Dr. Harrington along with his employees told investigators a number of patients that were known to be carriers of infectious diseases had been treated. The dentist allegedly allowed dental assistants who were unlicensed to administer needed medications.

Under Armour Raised to Outperform at BMO Capital Markets

Just Group Given Outperform Rating at Royal Bank of Canada

AMETEK, Inc. Given Average Recommendation of “Buy” by Brokerages