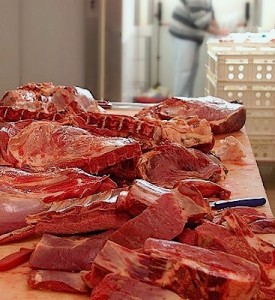 Researchers claim that eating large quantities of red meat could increase the risk of developing Alzheimer’s disease because it might increase the iron levels inside the brain.

When they compared their results against another set of scans of the brain, they found that the levels of iron were tied to tissue damage in patients with Alzheimer’s but not in older people who were healthy.

The study however did not prove that the iron was responsible for causing Alzheimer’s, but researchers expressed that the study’s results suggest iron might contribute to its cause.

The scientists said that by lowering the intake of red meat along with iron in dietary supplement could reduce the overall amount of iron that builds up inside the brain.

The majority of Alzheimer’s studies have focused on the proteins beta-amyloid and Tau, which collect inside the brains of those who suffer from the debilitating disease and researchers believe they disrupt or kill nerve cells.

However, the researchers in this new study suggest that the accumulation of iron is another possible factor that contributes to the development of the disease.

Even though iron is needed in order that cell function properly, some scientists believe it becomes toxic when in high levels.

The location in the brain where the largest concentrations of iron are found is in cells that produce myelin, a fatty tissue that covers the nerve fibers so they can communicate with each other.

When myelin is broken down, it promotes plaque buildup, which leads to further cell death and deterioration, said researchers.

Next »
Lenovo Uses Startup for Return of Start Menu on Windows