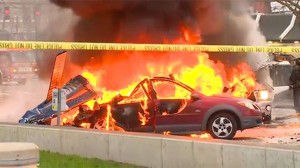 Authorities said that at least two and possibly more people were killed when a helicopter for a local news channel crashed on Tuesday in Seattle’s downtown area.

The crash set cars near the scene on fire in an area popular with tourists closed to the famous Space Needle. Two people were declared dead when emergency unites arrives on scene, said a spokesperson for the Fire Department of Seattle.

KOMO, a local TV station said that the fallen helicopter had been a news helicopter of theirs. A reporter for KOMO said on his Twitter page that the crash by the KOMO chopper appears to have killed their colleagues that were onboard.

Online photos of the scene by KOMO showed bright orange flames and billows of smoke rising from the helicopter and cars at the crash scene.

News footage on video taken after the fire was extinguished showed the charred vehicles without their windows, as they had been blown out. The street near the fire was covered in fire retardant.

A man who was 37 years of age was able to crawl from one of the cars hit in the accident. He was transported to a nearby hospital and listed as critical, said a police department spokesperson. In all, there were three cars that were set ablaze by the falling helicopter.

The crash, said the website of KOMO, took place on Seattle’s Broad Street, not far away from the city’s renowned Space Needle.

The well-known Space Needle is a popular area for tourists. It also is host to the Pacific Science Center and a museum for children.

Representatives from both the Seattle fire and police departments were not available to make any further comments.

One witness told a local newspaper that the helicopter appeared as if it had fallen from the helipad located on the top of the building where KOMO is located.

The witness said the helicopter’s engine made a loud noise, and just seconds later a huge boom could be heard.