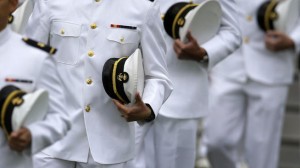 Three football players from the U.S. Naval Academy were charged with raping a female midshipman then making false statements. This is just the latest scandal related to sexual assault to hit the elite academy.

The charges were filed by the academy, but they did not identify who the accused were. Their names will be officially made public in a preliminary hearing referred to as Article 32, which most likely will happen sometime during the summer, said experts in military law.

The female midshipman’s attorney, who said she had been raped by three football players from the Navy, said her client had been reprimanded for drinking. The probe by NCIS was dropped when a player had requested that she not cooperate.

Within just weeks of releasing the study performed by the Pentagon that said nearly 26,000 service personnel in the U.S. had reported unwanted sexual contact in 2012, a plethora of generals appeared in front of a Senate panel on June 4 to testify regarding the handling by the military of the many sexual assaults.

Although many had been openly critical of the record of the military, they were successful in beating back an effort that had been spearheaded by Kirsten Gillibrand a Democratic Senator from New York, to take away the authority they hold over these types of cases.

The three athletes from the Naval Academy, including one who had his graduation held up in May since he was under investigation, have been accused of sexually assaulting the woman during a party held in April of 2012 at a house located off campus used by players on the academy football team.

Next »
US Companies Want to Save Corporate Tax Loopholes