Seconds Prior to Crashing, Passengers aware they were too low 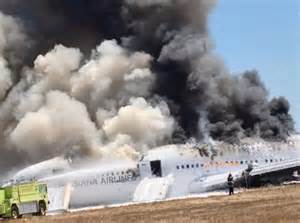 Flight 214 on Asiana Airlines was only seconds away from touchdown when passengers were able to sense something was dangerously amiss.

The plane was on its approach to San Francisco Airport under a clear sky, but was too low.

One passenger Ben Levy looked out his window from his seat and said he was able to see the water in the Bay only 10 feet below the aircraft.

Levy said he recalled seeing only water and no runway. Then without any warning from the crew, the plane slammed onto the runway’s edge.

The strong impact severed the tail of the plane and sent the remainder of the plane spinning. Huge fireballs and clouds of dark smoke billowed skyward.

First responders rushed to the crash scene, while horrified onlookers inside the airport’s terminal feared the worst.

The bodies of two girls from China were found by medics on the runway, beside the plane’s burning wreckage. The girls were both 16.

The other 305 people aboard the plane remarkably survived the ordeal on Saturday morning.

Seventy students from China, along with their teachers, had been headed to a summer camp in the U.S.

Some passengers were exiting the water, when rescuers first arrived on scene. Fire officials believe the passengers might have rushed to the water’s edge since the plane was engulfed in flames.

In all, 182 passengers were taken to nearby hospitals with injuries from bruises to spinal fractures. Another group, 123 in all, managed to survive unharmed.

The flight originated in Shanghai, made one connection in Seoul, before its 10-hour flight to San Francisco.