Obama Tells Assad Chemical Weapons Are Not an Option 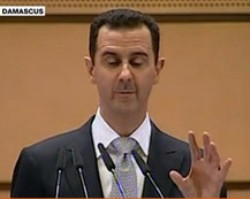 Syrian President Bashar al-Assad was warned by President Barack Obama about using chemical or biological weapons in fighting the rebels. President Obama warned that U.S. forces would move against the government of Syria if the regime used the weapons against the rebel forces that have fought to overthrow the Assad regime since 2011.

Obama’s statement was one of his strongest towards Syria to date. It comes when United Nations observers have pulled out of the country in a failed attempt to bring peace and regime forces are stepping up attacks against the rebel forces. Obama said Assad’s regime would face nasty consequences if biological or chemical weapons were used or moved into more strategic positions.

President Obama is campaigning for reelection this year with the vote in November. He mentioned that up until now he has been silent about ordering U.S. military forces to engage against the Syrian government, but he said he could change his mind and deploy forces to secure the weapons if they are used or moved.

The president said he had been very clear with the regime in Syria and to the other factions fighting that if the red line is crossed, that is when the chemical or biological weapons are used or moved, than U.S. forces are ready to be deployed.

Obama does not want the weapons to get into the hands of other people who could use them against innocent people. He told reporters that he was unsure if the stockpile in Syria was secure or not. Obama called on Assad to step aside to allow for a peaceful Democratic transition.

However, the U.S. president had to admit he did not think a peaceful end would be reached to the current conflict in Syria.