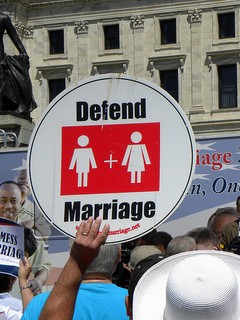 The platform committee for the Republican Party rejected resoundingly on Tuesday an amendment endorsing gay couples’ civil unions. The GOP said it would maintain its support for an amendment to the constitution that protects traditional marriage as between one man and one woman.

The platform for the Democratic National Committee embraced marriage for gays, aided by the decision of President Obama to endorse the same earlier this year. However, during a subcommittee meeting this week of the RNC, similar amendments received a resounding rejection. Those whom support marriage equality in the Republican Party wanted a vote prior to the full 100 members voting.

The representative from Rhode Island, Barbara Fenton, called for an amendment that would give recognition to civil union partnerships for homosexual and heterosexual couples. Fenton said that as a Catholic, there was not anyone that believes more than her that marriage is defined as between one man and one woman. However, she said, that was her belief, and the country was found on a separation of church and state.

She added that she did not see people for their color or their sexuality because for her generation, many times homosexuality is not a big issue. The room, during Fenton’s talk was silent, as social conservatives listened respectfully. Following her talk, the chairman asked if anyone would like to speak and a number of hands few into the air.

Comments ranged from the Republican Party being the party that always has defended traditional marriage to one that said civil unions were nothing but counterfeit marriages.

Fenton was one of just four people that spoke out in support of additional gay rights on the platform. Representatives from the Log Cabin Republicans were aggressively pushing their agenda. The group supports gay rights.