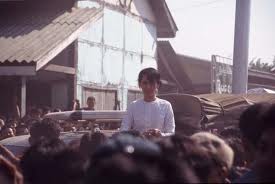 Thousands of people in Burma are participating in by-elections today. Aung San Suu Kyi, the Noble Prize winner is running for the first time for political office. The National League of Democracy, her party, is competing for the total 45 seats that are up for grabs. This is the first time the NLD party has participated in any election since 1990.

International observers and foreign journalists have been given unprecedented access never before seen. If the vote goes at it should and there are no cries of corruption, the European Union has mentioned they might ease some of the sanctions against the country.

Early results show that Suu Kyi has won a parliamentary seat in the elections. If confirmed, the victory will mark a huge milestone for the nation. For nearly 50 years, the country has been ruled by the military almost exclusively.

The last time the country had elections Suu Kyi was confined to her home under house arrest. The hope is with this by-election, reforms that were started by the civilian government will be able to continue.

Suu Kyi has complained that there have been irregularities while she has been campaigning. However, she said it had been worth it since she was able to increase people’s political awareness through her travels across the entire country.

With the seats available, the balance of power will not be shifted in Burma. Nevertheless, it should give former political dissidents more of a voice in the political system. That they hope will give them something to build on for their own and their country’s future.

Next »
New Film About Jobs To Feature Kutcher