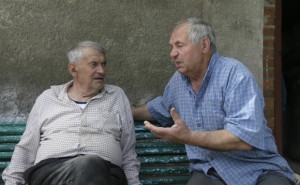 A former leader of a Nazi SS unit, which burned villages of women and children, lied to officials from immigration in the U.S. in order to enter the U.S. He is alleged to have been living in the state of Minnesota since shortly after the end of World War II.

The evidence was originally uncovered by the Associated Press and involved 94-year old Michael Karkoc. He told authorities in the U.S. in 1949 that he was not in the military during WWII, concealing the work he performed as a founding member and officer in an SS division. The information comes from documents the AP was given through a request of the Freedom of Information Act.

The SS division and a nationalist organization in Ukraine he served in both were on a blacklist of groups that the U.S. government secretly kept. The blacklist’s members were forbidden, at the time, from legally entering the U.S.

Records do not indicated Karkoc played a direct role in any war crimes, but statements from members of his unit and other documents confirm the company in Ukraine he commanded had massacred civilians.

The same documentation also suggested that Karkoc was present for atrocities as the leader of the company. Files from the Nazi SS say Karkoc and the unit he commanded were involved in the Warsaw Uprising of 1944, in which members of the Nazis brutally suppressed the Polish rebellion against the occupation of the Germans.

German authorities are examining the information to see if enough exists to prosecute Karkoc. German laws allow for Nazis that had “command responsibility” to be charged even if their involvement in atrocities cannot be proved.

Graviocoin Trading Up 11.2% This Week