There were fewer Americans who applied for jobless benefits last week. At the same time, consumer confidence neared a five year high as the largest part of the economy benefited from improving housing and job markets. 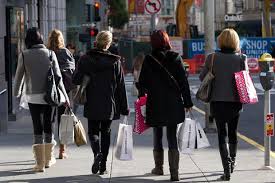 Unemployment claims dropped by 23,000 to 340,000 in the week that ended May 18. This was according to the report released by the Labor Department. The weekly Bloomberg Consumer Comfort Index went up to minus 29.4 for the period that ended May 19 from minus 30.2 the past week.

Increasing home values, dropping dismissals, and record stock prices are providing households the confidence to keep on spending, which has been helping the economy offset the federal budget cuts that have estimated to limit the expansion. Federal Reserve Chairman Ben S. Bernanke indicated that policy makers will not decrease the stimulus until gains in employment are sustained.

Other reports released today showed prices of previously owned properties went up in March by the most and sales of new houses increased more than the estimate in April.

Stocks went down due to the unexpected contraction in China manufacturing increased concern that the economy across the globe was slowing and offset the improving data in the United States. The Standard & Poor’s 500 Index dropped 0.3 percent to 1,650.51. The yield on the benchmark 10-year Treasury note went down to 2.02 percent from 2.04 percent.

China’s manufacturing is declining in May for the first time in seven months. This added to indicators that economic growth is slowing for a second quarter in a row. Another Markit index for euro-area services and factory output showed an increase that was more than the estimates.

The average forecast of 50 economists polled by Bloomberg called for jobless claims in the United States to decline to 345,000. Estimates ranged from 338,000 to 360,000. The Labor Department modified the previous week’s numbers to 363,000 from the previous reported 360,000.