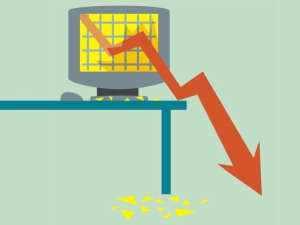 Personal Computer global shipments fell by 10% during 2013 and by 6.9% during the last three months of the year compared to the same period in 2012.

The PC industry marked a historically poor year in 2013 and looks forward to a reversal of fortunes in 2014.

Research firms IDC and Gartner Inc said that shipments worldwide of PC’s in 2013 were the worst slump in sales for that industry since tracking of sales began in the market sometime in the early part of the 1980s.

Makers of personal computers have been hit hard as both businesses and consumers spend more of their time using tablets and smartphones and have become slower in replacing their aging PCs.

Research firms and industry executives over the last few months have been reporting an easing in the decline of PC sales. The figures just released by IDC and Gartner tend to lend support to the latest reports.

The latest trend is not good news for Intel Corp or Microsoft, whose software as well as microprocessors power the great majority of the PCs. Both companies foothold in the tablet and phone markets are much smaller.

Makers of PCs hope demand will increase with their new types of computers that include laptops that have touchscreens, devices that are two-in-one working as either a laptop or tablet and computers running in two separate operating systems.

While the figures for sales were very low, there were signs of reaching the bottom, especially as the economy improves and businesses become more willing to increase their technology budgets. In 2014, Gartner has estimated that PC and two-in-one devices will see sales of 318 million, which will be unchanged from 2013 figures.

The sales of PCs seems to be in a stabilizing mode said one industry analyst during the Consumer Electronics Show held this past week in Las Vegas.

The analyst said that one factor that could help stabilize PC sales is that people are now becoming more familiar and comfortable with the latest version of Microsoft’s Windows, which offers an interface that is tailored for the use of touch commands.