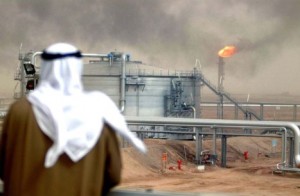 Saudi Arabia has quietly told participants in the oil market that Riyadh is fine with oil prices being markedly lower for a long period, which is a sharp shift of policy that might be aimed at slowing down the expansion by rival producers which includes those in the shale patch in the United States.

Some members of OPEC including Venezuela are calling for production cuts so global prices of oil will be pushed back up over the $100 per barrel price.

However, officials in Saudi Arabia have sent out a different message in private with investors in the oil market and analysts that says the kingdom, the largest producer in OPEC, is willing to accept prices of oil at less than $90 a barrel and perhaps down as low as $80 a barrel, for up to two years.

The discussions, some taking place over the last week in New York, offer a clear sign that the kingdom is putting aside a longstanding strategy of holding oil prices at the price of $100 per barrel, in favor of keeping the market share in the coming years.

It appears now that the Saudis are betting that a time of lower prices, which would likely put a strain on the finances of some OPEC members countries, would be needed to make way for more revenues during the medium turn, by cutting back the new investment and the further increases in the supply chain from other places such as the shale patch in the U.S. or from ultra-deepwater.

The anonymous conversations with officials from Saudi Arabia with these two sources did not offer specific guidance on the amount the kingdom was willing to cut output, which is something many believe will be done to shore up the world market that is producing much more crude than is consumable. Pumps in Saudi Arabia produce close to one third of the oil of OPEC or 9.7 million barrels each day.

Asked about output curbs coming from Saudi Arabia, one official in the country asked what cuts, according to the sources.

In addition, another uncertainty is if the briefings by Saudi officials to observers in the oil market represent a new avenue it has committed to or just a discussion that is meant cajole other members of OPEC to eventually join it in tightening the supply taps.