Raspberry Pi Computer Will Cost You Only $5 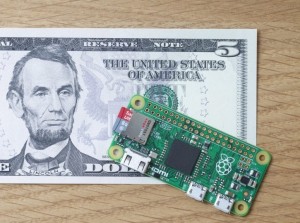 The new educational micro-computer by Raspberry Pi is the cheapest it has made to date – a device that is pocket-sized designed for teaching kids coding for only $5.

The new Raspberry Pi Zero was unveiled Thursday and is the most recent computer from the company that for the past couple of years has had a mission to make computing accessible to all children that want learn.

Manufactured in Wales, the computer features RAM of 512 MB, an ARM processor that is 1GHz, a microSD slot, a mini-socket for HDMI and micros USB sockets. The petite computer measures just 65mm x 30mm x 5mm.

These basic computers similar to the Raspberry Pi computers are being seen as a gateway for children to programming.

This year with Raspberry Pi input, the BBC created an educational computer called the MicroBit, which is being given away to 11-year-old children throughout the United Kingdom.

Programming has been part of the national curriculum and that required it to be taught in school across Britain for the past year.

The tech industry has widely supported it and it sees coding education an investment for its future as well.

The company’s founder and CEO Eben Upton introduced the Pi Zero on a video explaining that when a child he drained his banking account to purchase computer. His mission with this new Pi Zero by Raspberry is to ensure in 2015 that children do not have the barriers to learning about computers that he did when growing up.

Though the first ever Raspberry Pi was less expensive than the equivalent computer by a five times, the price still was a barrier for a number of people, said Upton.

The latest Pi has become as cheap as any computer will ever likely become.

Raspberry Pi has manufactured thousands of the new Pi Zeros but it believes the demand will far outstrip the supply.