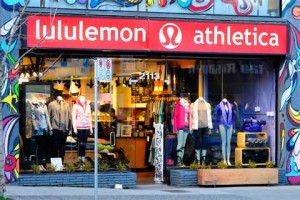 Lululemon Athletica Inc increased its revenue and profit forecast for the full year, the most recent sign the yogawear retailer based in Canada is recovering from turmoil caused by the recall of yoga pants that caused great embarrassment due to being too sheer in 2013.

The company reported as well a profit that was better than had been expected for the eighth consecutive quarter, which helped send its shares up more than 3% in Tuesday premarket trading.

Lululemon is going through a turnaround that is improving quality, expanding its line of products and solving problems with its supply chain, while laying a foundation for faster international growth.

The guidance is conservative said one analyst likely so it can be beaten again, but it is still too early and the bar can be increased down the road.

Total comparable sales at Lululemon increased 6% during the first quarter that ended on May 3 in comparison to an increase of 1% during the same period one year ago.

Analysts were expecting profit to come in at 33 cents a share with revenue reaching as high as $418.8 million.

Schaeffler Given a €7.50 Price Target by Kepler Capital Markets Analysts

Uniper Given a €29.90 Price Target by Independent Research Analysts