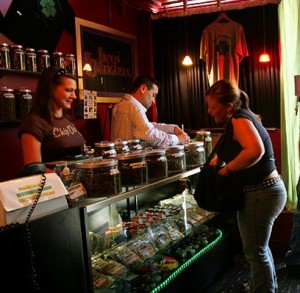 Tourists from across the globe are descending upon Colorado so they can become stoned legally.

The owner of 3D Cannabis Center a dispensary in Denver for marijuana said that tour buses are arriving every day. A large number of the tourists are from Japan and Saudi Arabia.

Charter buses are coming from places as far away as Texas.

The dispensary is billing itself as a destination that is tourist friendly. It offers a reception room that is styled like a living room and a viewing corridor that is 80 feet long with windows so the customers can see the greenhouse that is full of marijuana.

The owner of the dispensary estimates that 70% of the nearly 200 customers per day are from another state or country.

In Boulder, Colorado, another dispensary receives nearly one third of its revenue from out of state.

That dispensary has had clients from California, Texas, Georgia and other places who have decided to travel to Colorado as a vacation spot due to marijuana now being legal for recreational use.

The State Budgeting and Planning office in Colorado said the state earned revenue of $19 million for taxes on recreational marijuana sales in the first six months of 2014.

However, the state does not calculate the amount that is from local buyers and the amount from people who live outside Colorado.

On January 1, 2014, recreational marijuana started to be sold in the state. Colorado also enjoyed a record season for snow skiing, which cannot be directly related to the legalization of marijuana use, even though many feel that is the case.

Entrepreneurs living outside Colorado have cashed in as well. A Dallas based tour bus company started running its buses to dispensaries in Denver after the legalization of marijuana.

He charges passengers $400 for a trip of 12 hours, which leaves on a Thursday and returns on a Monday. Included is two nights at a hotel.

The tours to Colorado account for nearly 25% of his current overall business.