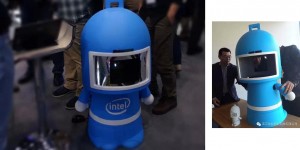 Intel surprised participants of the annual Intel Developer Forum by teaming up with a Chinese company to create a 3D printed robot based on its iconic mascot. The robot is 1 meter tall and has a host of activities it can complete, including telling stories, identifying animals, and interacting with humans. The robot got quite a reception at the forum, with many people posing for pictures with it. The Intel Developer Forum was held in Shenzhen, China this year.

The new model of the mascot is considerably more advanced than the plush version that was sold in the 1990s. It is a fully functional robot and is equipped with Intel’s Real Sense technology. The Intel RealSense technology enables more natural and intuitive interaction with personal computing devices. Intel hopes to put the RealSense system into laptops and tablets in the future.

It took Intel and 3D printing company Nanjing Profeta Tech. just two months to complete the project. 3D printing is faster and less complicated than other methods of robot creation. A similar project using traditional methods would have taken about three times as long. Several miniature versions of the robot were built and tested prior to creating the 1-meter tall unit that was put on display.

Intel’s previous project was a swarm of robot spiders that could be controlled with a wave of the hand. Intel CEO Brian Krzanich demonstrated how to cause lights on the robots to change shape and how control their movement from bands worn on the wrist. The robots were powered by a new minicomputer developed by Intel called Curie. It is the company’s first purpose-built system for wearable devices and contains Bluetooth low-energy radio, sensors and battery charging technologies.