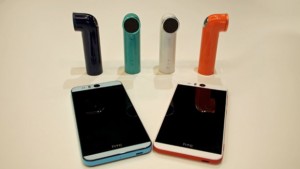 During a press event in New York City on Wednesday HTC launched two new electronic devices: a smartphone with a front-facing high-resolution camera and an action cam made tor operation with just on hand.

The Desire Eye has a screen that is 5.2 inches, a Snapdragon processor and a battery that is 2400mAh,

The unique feature of the phone is the front facing camera has 13 megapixels and a dual tone flash, which are the same specs the rear camera has as well.

In other respects, the new smartphone falls between the flagship HTC One M8 and the Desire 816, which a mid-range smartphone.

New features in software include an auto timer, a shutter that is voice activated and the simultaneous video capture on both the rear and front cameras.

Face tracking on the front camera keeps the subject in focus while moving within the frame. There is also an option to share the screen view while on a video chat.

The new Desire Eye from HTC will be sold by AT&T in the U.S. with the wireless carrier announcing its prices and availability over the next few weeks.

The other piece of hardware introduced was the HTC RE, an action cam that is periscope shaped that is able to capture still images at 16 megapixels and a video of 1080.

The cam is aimed directly at GoPro and its action market. The camera seems to have taken something from the Flip camera, which was once very popular.

The RE’s simplicity in its use is targeted for novices in cameras. The RE is waterproof and can be held in only one hand. It has no power button, it is automatically turned on when picked up.

There is a single large button to take photos to stop and stop a video recording.

The lens on the RE is 146-degree field view. That is necessary since no viewfinder exists to check composition.

Video in slow motion can be recorded at a 720 resolution and 120 fps.

An HTC app lets users control this new camera remotely from both iOS and Android devices.

The RE will cost $199 in the U.S. and will be available before the holiday shopping season begins.