Factory Activity in Euro Zone Ends with Growth in 2015 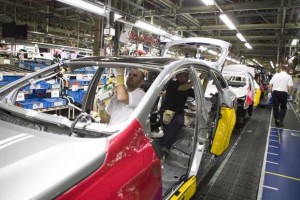 The factory activity across the euro zone ended this past year with growth in each of the countries that were included in a survey that was made public on Monday, suggesting that growth in manufacturing over the past year in general averaged above the last three.

However, despite companies cutting their prices for a fourth straight month and a euro that that is weaker, making the manufactured goods across the bloc cheaper abroad, growth remained albeit tepid.

Markit’s final Purchasing Manager’s Index for manufacturing increased to a high of 20-months in December of 53.2, which is just more than the 53.1 flash reading and beating the 52.8 November number.

It has held onto its 50 mark that is the separation point between contraction and growth, for over the past 2 years.

An index that measures output that feeds into the composite PMI is due to be released on Wednesday and is seen as a solid guide to growth.

It too increased to a high of 20 months, coming in at a strong 54.5 beating the 54.4 flash number and comfortably finishing above the 54 for November.

While much is to be considered positive in these latest figures, the underlying picture remains solid yet not spectacular in expansion, said an economist with Markit.

With manufacturing in the euro zone is still nearly 10% off its peak prior to the crisis, it looks as if that sector still has a distance to go prior to climbing back to where it has completely recovered.

An index for new orders was up from 53.5 to 54.2, which was its highest reading in 10 months, which was helped through price discounting.

The ECB or European Central Bank thus far has failed to have inflation come anywhere close to its target of 2% despite its monetary policy that can only be described as ultra-loose and the output sub-50 price index will add pressure to the bank’s Governing Council to make even further easing.