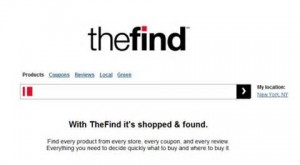 Facebook has acquired TheFind a website based in Mountain View, California that lets shoppers search for a particular product on hundreds of sites at once. However, the social network said its goal for this acquisition was less about e-commerce and more about targeted advertisements.

The platform and resources of Facebook give us an opportunity to scale the company’s expertise of product sourcing to more than 1 billion people using their platform, said TheFind on a post on its website that also disclosed that the search engine was be shuttered and a few short weeks.

While the focus of TheFind has been to help consumers search through the web for products they are looking for, Facebook does not seem to want that product from the team once it becomes part of its company.

Instead, a spokesperson for Facebook said the team from TheFind would be tasked to make sure users on Facebook see ads for the products they want.

The spokesperson added that together the thought is Facebook ad experience can become even better and more relevant for consumers.

The spokesperson ended by saying their business was all about connecting people with companies, topics, brands and products they want.

The Atlas product from the company which was re-launched in 2104 after it was acquired by Facebook from Microsoft attempts to show the advertisers the products that different users purchased both offline and online.

TheFind uses a widely sourced combination of data to locate products for shoppers and TheFInd staff will bring that vast knowledge to the social media giant.

Facebook paid an undisclosed sum for TheFind, which was founded back in 2006. TheFind raised over $17.6 million of venture financing from different sources.

Shares of Facebook were down 1.1% on Friday and did not make much of a move during after hours following the company’s announcement of the acquisition.

SeaWorld Entertainment, Inc. Given Average Recommendation of “Buy” by Analysts

Huntington Bancshares Incorporated Expected to Announce Earnings of $0.37 Per Share