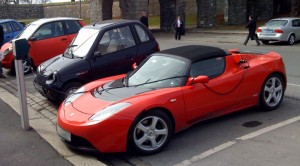 Tesla the electric carmaker saw its share prices jump by 2.5% on Tuesday to $90 after it had jumped by over 14% on Monday.

The stock’s spike in price started during the first week of May when quarterly earnings showed the company had reached a profit for the first time during a quarter.

On Monday, Tesla stock closed at $87.80 per share or up by 57% from its share prices last Thursday of $55.79, prior to it announcing its first-quarter earnings. Since the start of April, the stock price for Tesla has skyrocketed by 138%.

Investors’ most recent infatuation with the electric carmaker based in California follows an excellent review of its Model S sedan in Consumer Reports last Friday.

The first quarter ended with a profit of $11 million that shattered any assumption that an automaker could not make money selling plug-in cars. Tesla posted a gross profit margin of 17%, using workers based in the U.S., in an industry that considers 10% to be outstanding.

Even though the first quarter was very impressive it will still be a long road for Tesla. The company’s fortunes are linked to its only auto, the Model S, which has a price range starting at $70,000 up to over $100,000.

The auto is able to run between 230 and 300 miles between charges, depending upon the battery size.

Consumer Reports is highly respected in the auto industry and said the car was the best it has tested in 6 years and gave it a score of 99 out of a possible 100.

Tesla’s most difficult task will be showing it can be profitable consistently with just a single product with a high price tag that the majority of buyers are not able to afford.

-$0.14 Earnings Per Share Expected for Design Therapeutics, Inc. This Quarter