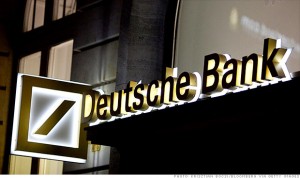 Reports are surfacing that Deutsche Bank is nearing a deal to pay a record penalty and accept a criminal guilty plea to settle allegations of participation in Wall Street’s manipulation of the London interbank offered rate, or Libor. The long-running investigation has involved regulatory authorities around the globe including federal prosecutors, New York State’s financial regulator, and regulators in London and Washington. Collectively, the authorities are expected to collect more than $1.5 billion from Deutsche Bank.

A condition of the deal will be that one of the bank’s British subsidiaries’ must plead guilty to fraud, according to the Justice Department. If accepted as a term of the deal, it would be the most significant banking unit to accept a criminal plea in the Libor investigation. The settlement would close one of the last cases to arise from the Libor manipulation investigation. According to people briefed on the matter, the case could be resolved as soon as this month.

Deutsche Bank, Germany’s largest financial institution, was one of several banks linked to the manipulation of the benchmark interest rate. In 2012, Barclays paid $450 million in the first Libor settlement to avoid criminal prosecution. Since that first settlement, fine amounts have risen and guilty pleas have become more common.

According to people briefed on the matter, the bank has dismissed about a dozen employees tied to the Libor case. However, the firings and a settlement would not end the bank’s legal problems. The bank currently faces investigations into any role played in currency manipulation and investigations into violations of United States sanctions against countries like Iran. Deutsche Bank’s American operations are in trouble with the Federal Reserve for lax internal controls and for a unit failing the Fed’s annual stress tests.