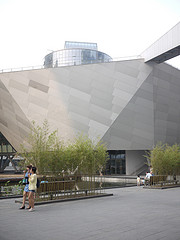 Hollywood is taking advantage of a new breach in the great cultural wall of China, albeit cautiously. On Monday, Disney announced that it would produce Iron Man 3 together with a company in China. This is just the latest sign that Hollywood is warming up to China’s recent openness.

China, for decades, has put limits on the number of films from other countries that are allowed in the country. The limit until recently was 20 however, Chinese officials in February, announced that quota would increase to 34.

Government officials also announced they would allow foreign movie studios earn more of the box office revenue than they have in the past. Previously the amount a foreign studio could expect was between 13% and 17.5%, now the limit will be capped at 25%.

For a government that is known to be leery of cultural influence from outside its borders, the recent changes are quite significant. The new changes could affect everyone from Hollywood’s most famous filmmakers to Guangzhou action movie fans.

The relaxing of strict rules in China comes at a price for foreign studios. The world’s largest country by population and the second largest economy wants foreign studios to form joint partnerships with studios in China.

The relationship between Hollywood and China has not always been harmonious and Hollywood is not gushing quite yet. Foreign movies are adored by the Chinese, especially those in 3D, like Avatar. However, studios have been promised by Beijing to more openness in the past only to be jilted by a change of plans by the government.