Brokerages forecast that Gogo Inc. (NASDAQ:GOGO) will announce earnings per share of ($0.04) for the current fiscal quarter, according to Zacks Investment Research. Seven analysts have provided estimates for Gogo’s earnings. The highest EPS estimate is $0.02 and the lowest is ($0.12). Gogo reported earnings per share of ($1.04) in the same quarter last year, which would indicate a positive year-over-year growth rate of 96.2%. The company is scheduled to report its next earnings report on Monday, August 9th.

On average, analysts expect that Gogo will report full-year earnings of $0.06 per share for the current fiscal year, with EPS estimates ranging from ($0.08) to $0.12. For the next fiscal year, analysts forecast that the company will report earnings of $0.45 per share, with EPS estimates ranging from $0.24 to $0.60. Zacks’ earnings per share calculations are a mean average based on a survey of sell-side analysts that cover Gogo.

Gogo (NASDAQ:GOGO) last issued its earnings results on Thursday, May 6th. The technology company reported ($0.09) earnings per share for the quarter, topping the consensus estimate of ($0.13) by $0.04. The business had revenue of $73.90 million for the quarter, compared to analyst estimates of $73.85 million. During the same period last year, the business posted ($1.04) EPS. Gogo’s revenue was up 4.2% on a year-over-year basis.

GOGO has been the topic of several analyst reports. Morgan Stanley reiterated an “equal weight” rating and issued a $13.00 target price on shares of Gogo in a research note on Monday, March 1st. Zacks Investment Research downgraded Gogo from a “buy” rating to a “hold” rating in a research report on Wednesday, March 17th. JPMorgan Chase & Co. cut Gogo from a “neutral” rating to an “underweight” rating and set a $10.00 price target for the company. in a report on Monday, February 1st. William Blair raised Gogo from a “market perform” rating to an “outperform” rating in a report on Sunday, April 4th. Finally, Cowen boosted their price target on Gogo from $14.00 to $15.00 and gave the stock an “outperform” rating in a report on Monday. One research analyst has rated the stock with a sell rating, three have given a hold rating and three have issued a buy rating to the company’s stock. The company presently has an average rating of “Hold” and an average target price of $10.67.

In other Gogo news, Director Robert L. Crandall bought 50,000 shares of the company’s stock in a transaction that occurred on Monday, May 10th. The stock was purchased at an average cost of $11.44 per share, for a total transaction of $572,000.00. The purchase was disclosed in a filing with the Securities & Exchange Commission, which is available at this hyperlink. Corporate insiders own 40.00% of the company’s stock. 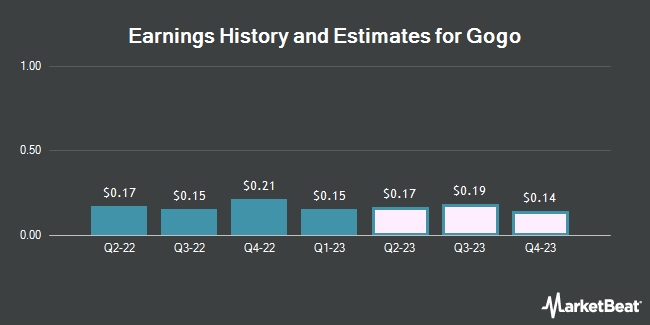 Receive News & Ratings for Gogo Daily - Enter your email address below to receive a concise daily summary of the latest news and analysts' ratings for Gogo and related companies with MarketBeat.com's FREE daily email newsletter.

$0.53 Earnings Per Share Expected for Trex Company, Inc. This Quarter

Complete the form below to receive the latest headlines and analysts' recommendations for Gogo with our free daily email newsletter: