Brokerages predict that Benefitfocus, Inc. (NASDAQ:BNFT) will announce sales of $59.00 million for the current fiscal quarter, according to Zacks. Four analysts have provided estimates for Benefitfocus’ earnings, with the lowest sales estimate coming in at $58.19 million and the highest estimate coming in at $59.99 million. Benefitfocus reported sales of $63.58 million during the same quarter last year, which indicates a negative year-over-year growth rate of 7.2%. The company is expected to announce its next quarterly earnings report on Thursday, November 4th.

A number of brokerages have issued reports on BNFT. The Goldman Sachs Group lowered Benefitfocus from a “neutral” rating to a “sell” rating and set a $13.00 price target on the stock. in a research note on Thursday, June 3rd. Zacks Investment Research downgraded Benefitfocus from a “hold” rating to a “sell” rating in a report on Wednesday, August 4th. Two equities research analysts have rated the stock with a sell rating, two have issued a hold rating and one has assigned a buy rating to the company. Based on data from MarketBeat.com, Benefitfocus presently has an average rating of “Hold” and an average price target of $14.50.

In other Benefitfocus news, CFO Alpana Wegner sold 2,354 shares of Benefitfocus stock in a transaction that occurred on Wednesday, September 1st. The stock was sold at an average price of $12.01, for a total transaction of $28,271.54. Following the sale, the chief financial officer now directly owns 100,727 shares in the company, valued at approximately $1,209,731.27. The transaction was disclosed in a document filed with the Securities & Exchange Commission, which is available through the SEC website. Company insiders own 21.70% of the company’s stock.

Benefitfocus, Inc engages in the provision of cloud-based benefits management platform for consumers, employers, insurance carriers, and brokers. The company was founded by Mason R. Holland and Shawn A. Jenkins in June 2000 and is headquartered in Charleston, SC. 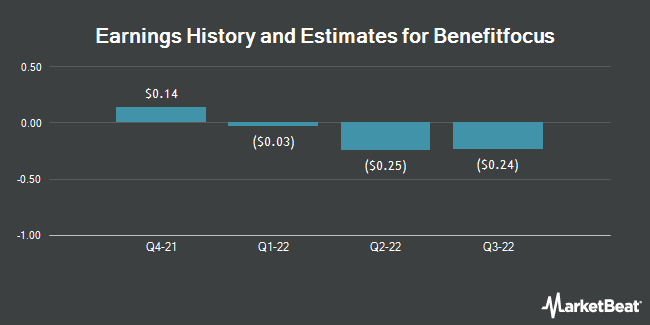 Complete the form below to receive the latest headlines and analysts' recommendations for Benefitfocus with our free daily email newsletter: