A number of other research analysts also recently issued reports on VRT. Deutsche Bank Aktiengesellschaft upped their price target on Vertiv from $21.00 to $24.00 and gave the company a “buy” rating in a report on Thursday, February 25th. Zacks Investment Research raised Vertiv from a “strong sell” rating to a “hold” rating in a report on Wednesday, March 17th. One investment analyst has rated the stock with a hold rating and seven have given a buy rating to the stock. Vertiv presently has a consensus rating of “Buy” and a consensus target price of $21.88.

Vertiv (NYSE:VRT) last released its earnings results on Tuesday, February 23rd. The company reported $0.33 EPS for the quarter, hitting analysts’ consensus estimates of $0.33. The company had revenue of $1.31 billion during the quarter, compared to analysts’ expectations of $1.26 billion. As a group, analysts forecast that Vertiv will post 0.77 earnings per share for the current fiscal year.

Vertiv Holdings Co, together with its subsidiaries, designs, manufactures, and services critical digital infrastructure technologies and life cycle services for data centers, communication networks, and commercial and industrial environments in the Americas, the Asia Pacific, Europe, the Middle East, and Africa. 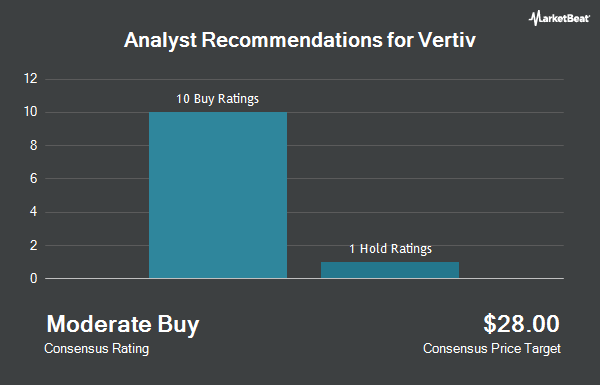 Receive News & Ratings for Vertiv Daily - Enter your email address below to receive a concise daily summary of the latest news and analysts' ratings for Vertiv and related companies with MarketBeat.com's FREE daily email newsletter.

Complete the form below to receive the latest headlines and analysts' recommendations for Vertiv with our free daily email newsletter: