Shares of Varonis Systems, Inc. (NASDAQ:VRNS) have been assigned a consensus rating of “Buy” from the twenty-one research firms that are covering the company, MarketBeat Ratings reports. Three analysts have rated the stock with a hold recommendation and sixteen have issued a buy recommendation on the company. The average 12-month target price among brokers that have issued ratings on the stock in the last year is $69.49.

Varonis Systems (NASDAQ:VRNS) last released its quarterly earnings data on Sunday, October 31st. The technology company reported $0.05 EPS for the quarter, beating the consensus estimate of $0.02 by $0.03. Varonis Systems had a negative net margin of 30.93% and a negative return on equity of 19.47%. The business had revenue of $100.40 million during the quarter, compared to the consensus estimate of $97.45 million. During the same quarter in the prior year, the firm earned ($0.18) EPS. The business’s revenue was up 30.7% on a year-over-year basis. As a group, sell-side analysts expect that Varonis Systems will post -0.75 earnings per share for the current year.

Featured Article: What is a closed-end mutual fund (CEF)? 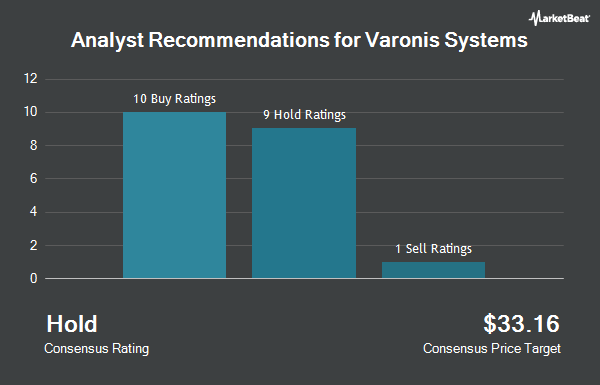 Cancom Given a €83.00 Price Target by Jefferies Financial Group Analysts

Krones Given a €117.00 Price Target by Deutsche Bank Aktiengesellschaft Analysts

Sanofi Given a €96.00 Price Target at Credit Suisse Group

Nokia Oyj PT Set at €6.20 by The Goldman Sachs Group

Varonis Systems, Inc. Given Average Recommendation of “Buy” by Brokerages

Complete the form below to receive the latest headlines and analysts' recommendations for Varonis Systems with our free daily email newsletter: