Shares of TC Energy Co. (TSE:TRP) (NYSE:TRP) have received a consensus rating of “Buy” from the nineteen analysts that are currently covering the firm, Marketbeat.com reports. Four analysts have rated the stock with a hold rating and eleven have assigned a buy rating to the company. The average 1 year target price among brokers that have updated their coverage on the stock in the last year is C$68.88.

TC Energy (TSE:TRP) (NYSE:TRP) last posted its earnings results on Thursday, February 18th. The company reported C$1.15 earnings per share (EPS) for the quarter, topping the Thomson Reuters’ consensus estimate of C$1.00 by C$0.15. The firm had revenue of C$3.30 billion for the quarter. As a group, research analysts anticipate that TC Energy will post 4.3600002 earnings per share for the current year.

The firm also recently announced a quarterly dividend, which will be paid on Friday, April 30th. Stockholders of record on Wednesday, March 31st will be given a dividend of $0.87 per share. This represents a $3.48 annualized dividend and a dividend yield of 5.88%. The ex-dividend date is Tuesday, March 30th. This is a positive change from TC Energy’s previous quarterly dividend of $0.81. TC Energy’s dividend payout ratio (DPR) is 68.35%. 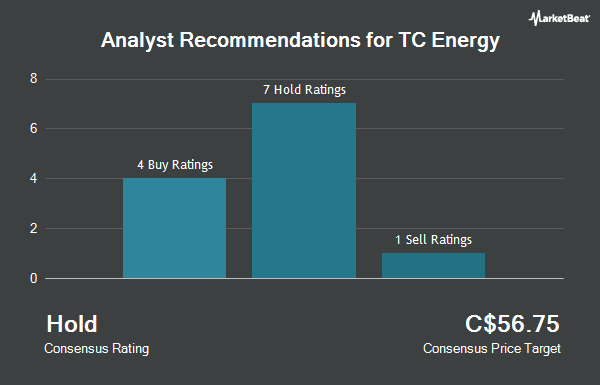 Complete the form below to receive the latest headlines and analysts' recommendations for TC Energy with our free daily email newsletter: