Enter your email address below to get the latest news and analysts' ratings for Tate & Lyle with our FREE daily email newsletter:

Tate & Lyle (LON:TATE) had its target price cut by analysts at Deutsche Bank from GBX 720 ($9.47) to GBX 650 ($8.55) in a report issued on Wednesday, Stock Target Advisor reports. The firm presently has a “hold” rating on the stock. Deutsche Bank’s price target would suggest a potential upside of 7.05% from the stock’s current price.

Tate & Lyle PLC, together with its subsidiaries, provides ingredients and solutions to the food, beverage, and other industries in the United States, the United Kingdom, other European countries, and internationally. It operates through three segments: Food & Beverage Solutions, Sucralose, and Primary Products.

Featured Story: What are the benefits of a balanced fund? 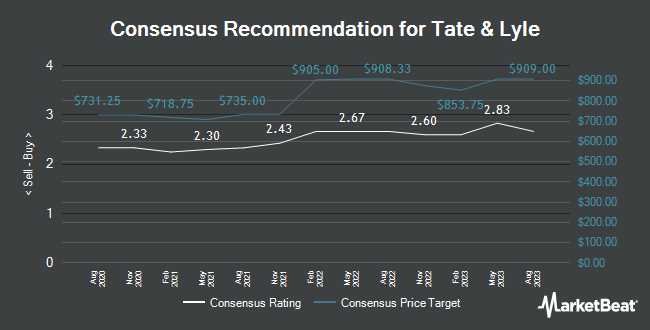 Head to Head Comparison: Allied Esports Entertainment versus The Competition

Macy’s versus Seven & i Head to Head Analysis