New York State Common Retirement Fund decreased its stake in SolarWinds Co. (NYSE:SWI) by 39.8% in the 3rd quarter, according to its most recent Form 13F filing with the Securities & Exchange Commission. The firm owned 71,039 shares of the software maker’s stock after selling 47,033 shares during the period. New York State Common Retirement Fund’s holdings in SolarWinds were worth $1,188,000 as of its most recent SEC filing.

SolarWinds (NYSE:SWI) last released its earnings results on Thursday, October 28th. The software maker reported $0.37 earnings per share (EPS) for the quarter, beating analysts’ consensus estimates of $0.06 by $0.31. SolarWinds had a net margin of 10.87% and a return on equity of 6.23%. The firm had revenue of $181.27 million during the quarter, compared to the consensus estimate of $196.18 million. During the same period in the previous year, the firm earned $0.44 earnings per share. SolarWinds’s revenue was down 1.9% compared to the same quarter last year. On average, analysts anticipate that SolarWinds Co. will post -0.44 EPS for the current year.

SolarWinds Corp. engages in the provision of information technology (IT)infrastructure management software. It provides network management, systems management, database management, IT security, IT helpdesk, and cloud services. The company was founded in 1999 and is headquartered in Austin, TX.

Read More: If I purchase shares through a brokerage account, am I the holder of record?

Want to see what other hedge funds are holding SWI? Visit HoldingsChannel.com to get the latest 13F filings and insider trades for SolarWinds Co. (NYSE:SWI). 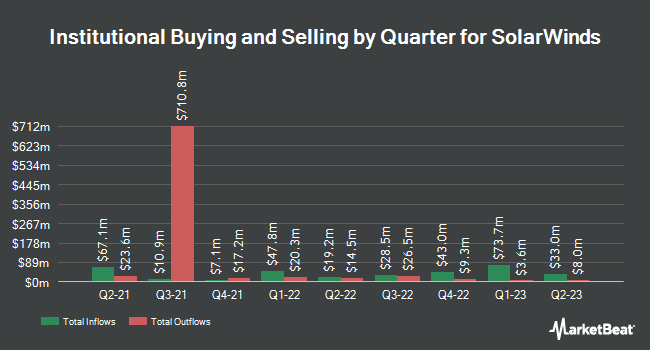 Complete the form below to receive the latest headlines and analysts' recommendations for SolarWinds with our free daily email newsletter: