Seeyond boosted its position in Xcel Energy Inc. (NASDAQ:XEL) by 0.5% during the second quarter, according to the company in its most recent disclosure with the Securities & Exchange Commission. The fund owned 37,183 shares of the company’s stock after buying an additional 167 shares during the period. Seeyond’s holdings in Xcel Energy were worth $2,449,000 as of its most recent filing with the Securities & Exchange Commission.

Several research analysts have recently weighed in on XEL shares. The Goldman Sachs Group raised Xcel Energy from a “neutral” rating to a “buy” rating and upped their target price for the stock from $73.00 to $76.00 in a research note on Tuesday. Barclays raised Xcel Energy from an “equal weight” rating to an “overweight” rating and increased their price objective for the company from $75.00 to $76.00 in a research note on Friday, October 1st. Finally, Mizuho increased their price objective on Xcel Energy from $63.00 to $70.00 and gave the company a “neutral” rating in a research note on Wednesday, August 4th. One investment analyst has rated the stock with a sell rating, four have issued a hold rating and three have assigned a buy rating to the company’s stock. According to MarketBeat, the company has a consensus rating of “Hold” and an average price target of $72.13.

Xcel Energy (NASDAQ:XEL) last issued its earnings results on Thursday, July 29th. The company reported $0.58 earnings per share (EPS) for the quarter, beating the Thomson Reuters’ consensus estimate of $0.56 by $0.02. The company had revenue of $3.07 billion during the quarter, compared to analysts’ expectations of $2.84 billion. Xcel Energy had a return on equity of 10.81% and a net margin of 12.28%. On average, analysts forecast that Xcel Energy Inc. will post 2.98 earnings per share for the current year.

The business also recently announced a quarterly dividend, which will be paid on Wednesday, October 20th. Shareholders of record on Wednesday, September 15th will be issued a $0.4575 dividend. This represents a $1.83 annualized dividend and a yield of 2.81%. The ex-dividend date is Tuesday, September 14th. Xcel Energy’s payout ratio is currently 65.59%.

In other Xcel Energy news, Chairman Benjamin G. S. Fowke III sold 54,348 shares of the company’s stock in a transaction on Wednesday, September 1st. The stock was sold at an average price of $69.73, for a total value of $3,789,686.04. Following the completion of the sale, the chairman now directly owns 200,555 shares in the company, valued at approximately $13,984,700.15. The sale was disclosed in a document filed with the SEC, which can be accessed through this link. 0.21% of the stock is owned by corporate insiders.

Read More: What is the cash asset ratio? 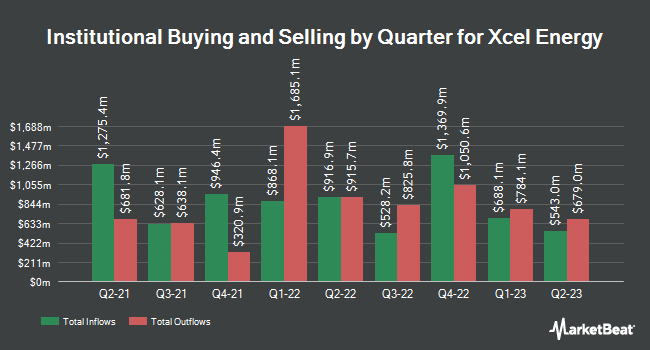 Complete the form below to receive the latest headlines and analysts' recommendations for Xcel Energy with our free daily email newsletter: