SM Energy (NYSE:SM – Get Rating) last released its quarterly earnings data on Thursday, November 3rd. The energy company reported $1.82 EPS for the quarter, topping analysts’ consensus estimates of $1.77 by $0.05. The firm had revenue of $835.45 million during the quarter, compared to the consensus estimate of $699.92 million. SM Energy had a net margin of 36.09% and a return on equity of 37.36%.

The company also recently disclosed a Semi-Annual dividend, which will be paid on Monday, February 6th. Investors of record on Friday, January 20th will be issued a $0.15 dividend. The ex-dividend date is Thursday, January 19th. This represents a yield of 0.9%. SM Energy’s dividend payout ratio is currently 2.92%.

SM Energy Company, an independent energy company, engages in the acquisition, exploration, development, and production of oil, natural gas, and natural gas liquids in the state of Texas. As of February 24, 2022, it had 492.0 million barrels of oil equivalent of estimated proved reserves. It also has working interests in 825 gross productive oil wells and 483 gross productive gas wells in the Midland Basin and South Texas. 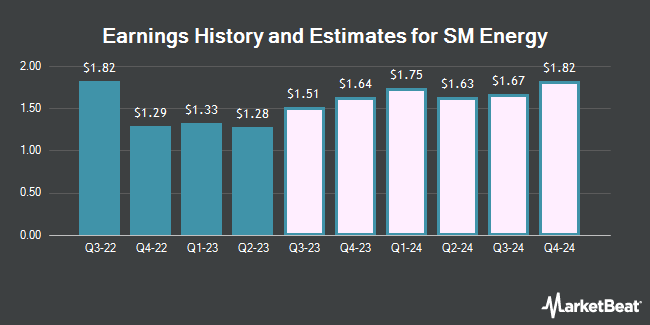 Complete the form below to receive the latest headlines and analysts' recommendations for SM Energy with our free daily email newsletter: