Prudential Financial Inc. cut its stake in shares of America’s Car-Mart, Inc. (NASDAQ:CRMT) by 5.5% during the second quarter, according to its most recent disclosure with the SEC. The institutional investor owned 7,169 shares of the company’s stock after selling 417 shares during the period. Prudential Financial Inc. owned about 0.11% of America’s Car-Mart worth $1,016,000 at the end of the most recent reporting period.

America’s Car-Mart, Inc engages in the sale of older model used vehicles and the provision of financing for its customers in the United States. It operates dealerships in the South-Central United States. The company was founded by Bill Fleeman in 1981 and is headquartered in Rogers, AR.

See Also: Why is the Consumer Price Index (CPI) important? 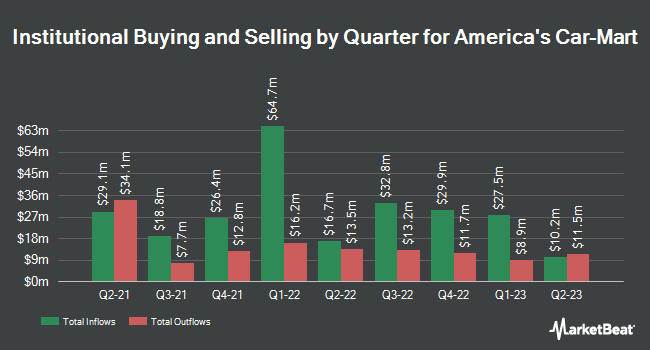 Complete the form below to receive the latest headlines and analysts' recommendations for America's Car-Mart with our free daily email newsletter: