Nuance Communications (NASDAQ:NUAN) was downgraded by Morgan Stanley from an “overweight” rating to an “equal weight” rating in a research report issued to clients and investors on Tuesday, Price Targets.com reports. They presently have a $56.00 price target on the software maker’s stock. Morgan Stanley’s price target suggests a potential upside of 6.77% from the company’s current price.

Nuance Communications (NASDAQ:NUAN) last released its quarterly earnings data on Sunday, May 9th. The software maker reported $0.20 earnings per share for the quarter, beating the Zacks’ consensus estimate of $0.17 by $0.03. The business had revenue of $347.00 million during the quarter, compared to analyst estimates of $346.45 million. Nuance Communications had a return on equity of 11.24% and a net margin of 1.89%. The company’s revenue was up 9.8% on a year-over-year basis. During the same quarter last year, the business posted $0.21 EPS. As a group, analysts forecast that Nuance Communications will post 0.4 earnings per share for the current year.

In other Nuance Communications news, CFO Daniel David Tempesta sold 120,342 shares of the business’s stock in a transaction that occurred on Monday, April 12th. The stock was sold at an average price of $52.95, for a total transaction of $6,372,108.90. Following the completion of the sale, the chief financial officer now directly owns 382,687 shares in the company, valued at approximately $20,263,276.65. The transaction was disclosed in a document filed with the SEC, which is available through this link. 0.48% of the stock is currently owned by insiders.

See Also: How to use beta for portfolio diversification 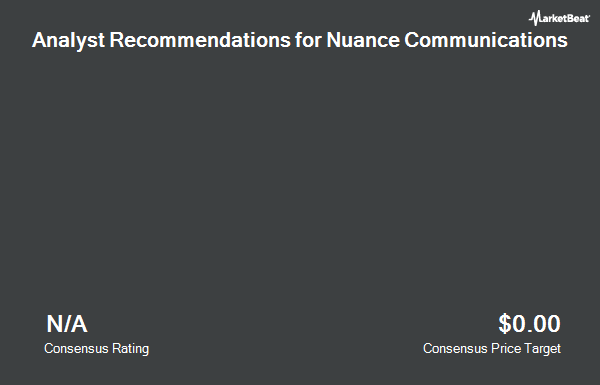 Complete the form below to receive the latest headlines and analysts' recommendations for Nuance Communications with our free daily email newsletter: