Nikola Co. (NASDAQ:NKLA) has been given a consensus rating of “Hold” by the ten analysts that are currently covering the stock, Marketbeat reports. Nine research analysts have rated the stock with a hold rating and one has issued a buy rating on the company. The average 1-year target price among brokers that have updated their coverage on the stock in the last year is $15.38.

Nikola (NASDAQ:NKLA) last announced its quarterly earnings results on Thursday, November 4th. The company reported ($0.22) earnings per share (EPS) for the quarter, topping the consensus estimate of ($0.41) by $0.19. During the same period in the prior year, the company posted ($0.31) earnings per share. Equities analysts anticipate that Nikola will post -1.79 earnings per share for the current year.

Nikola Corp. engages in the provision of zero-emissions transportation and infrastructure solutions. It designs and manufactures battery-electric and hydrogen-electric vehicles, electric vehicle drivetrains, vehicle components, energy storage systems and hydrogen fueling station infrastructure. The company was founded by Trevor Milton in 2015 and is headquartered in Phoenix, AZ. 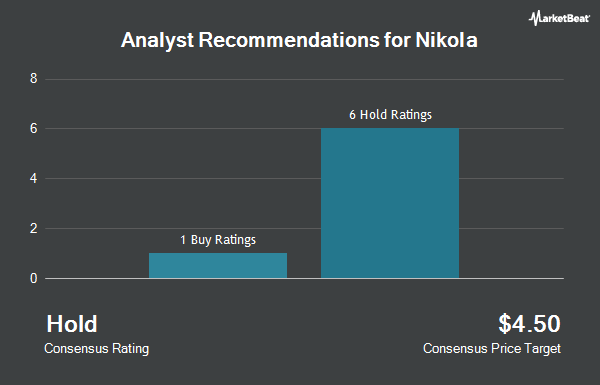 Receive News & Ratings for Nikola Daily - Enter your email address below to receive a concise daily summary of the latest news and analysts' ratings for Nikola and related companies with MarketBeat.com's FREE daily email newsletter.

Vonovia Given a €62.00 Price Target by UBS Group Analysts

Complete the form below to receive the latest headlines and analysts' recommendations for Nikola with our free daily email newsletter: