New York State Teachers Retirement System reduced its position in Masonite International Co. (NYSE:DOOR) by 4.8% in the 1st quarter, according to its most recent filing with the Securities and Exchange Commission (SEC). The institutional investor owned 2,000 shares of the company’s stock after selling 100 shares during the period. New York State Teachers Retirement System’s holdings in Masonite International were worth $230,000 as of its most recent SEC filing.

Masonite International (NYSE:DOOR) last released its quarterly earnings data on Tuesday, May 4th. The company reported $1.93 earnings per share (EPS) for the quarter, topping the Zacks’ consensus estimate of $1.77 by $0.16. Masonite International had a net margin of 2.01% and a return on equity of 22.09%. The business had revenue of $646.34 million during the quarter, compared to analysts’ expectations of $601.32 million. During the same period in the prior year, the company earned $1.24 EPS. The firm’s quarterly revenue was up 17.3% compared to the same quarter last year. On average, research analysts predict that Masonite International Co. will post 6 EPS for the current fiscal year.

In related news, Director Jonathan F. Foster sold 2,300 shares of the stock in a transaction dated Friday, May 7th. The shares were sold at an average price of $127.22, for a total transaction of $292,606.00. Following the completion of the transaction, the director now owns 7,727 shares in the company, valued at $983,028.94. The transaction was disclosed in a document filed with the SEC, which is available through this link. Also, Director John H. Chuang purchased 10,000 shares of Masonite International stock in a transaction that occurred on Tuesday, May 11th. The shares were bought at an average price of $124.66 per share, with a total value of $1,246,600.00. The disclosure for this purchase can be found here. Corporate insiders own 1.49% of the company’s stock.

Featured Article: Cost of equity and a company’s balance sheet 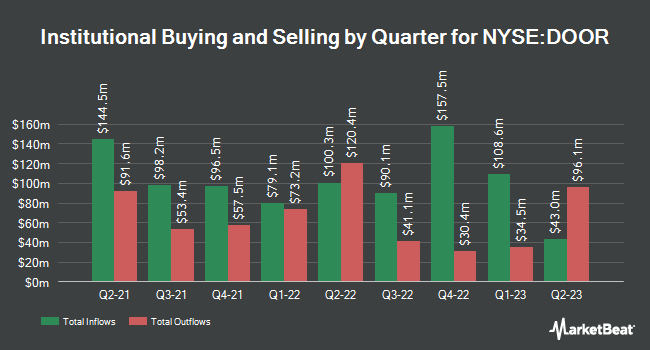 Complete the form below to receive the latest headlines and analysts' recommendations for Masonite International with our free daily email newsletter: