A number of other equities research analysts also recently commented on the stock. Truist upgraded shares of Medpace from a “hold” rating to a “buy” rating and raised their price objective for the company from $124.00 to $135.00 in a research report on Friday, October 2nd. BidaskClub upgraded shares of Medpace from a “buy” rating to a “strong-buy” rating in a research report on Friday, December 11th. Three research analysts have rated the stock with a hold rating, four have issued a buy rating and one has issued a strong buy rating to the company’s stock. The stock presently has an average rating of “Buy” and a consensus price target of $110.00.

Medpace (NASDAQ:MEDP) last posted its earnings results on Saturday, October 31st. The company reported $1.09 EPS for the quarter, beating the consensus estimate of $1.07 by $0.02. The firm had revenue of $230.37 million for the quarter, compared to analyst estimates of $223.56 million. Medpace had a return on equity of 17.67% and a net margin of 13.87%. Medpace’s revenue for the quarter was up 6.5% compared to the same quarter last year. During the same quarter in the prior year, the company posted $0.71 earnings per share. On average, equities research analysts anticipate that Medpace will post 4 EPS for the current fiscal year. 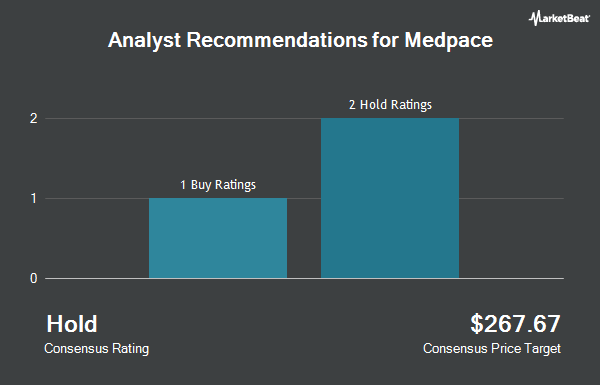 Receive News & Ratings for Medpace Daily - Enter your email address below to receive a concise daily summary of the latest news and analysts' ratings for Medpace and related companies with MarketBeat.com's FREE daily email newsletter.

CVS Health Co. Expected to Announce Earnings of $1.24 Per Share

Complete the form below to receive the latest headlines and analysts' recommendations for Medpace with our free daily email newsletter: