Wall Street analysts expect McAfee Corp. (NASDAQ:MCFE) to announce $466.70 million in sales for the current quarter, according to Zacks Investment Research. Three analysts have provided estimates for McAfee’s earnings, with estimates ranging from $466.20 million to $467.00 million. McAfee reported sales of $728.00 million during the same quarter last year, which indicates a negative year over year growth rate of 35.9%. The firm is scheduled to announce its next quarterly earnings results on Thursday, November 18th.

On average, analysts expect that McAfee will report full-year sales of $1.85 billion for the current fiscal year, with estimates ranging from $1.84 billion to $1.85 billion. For the next financial year, analysts forecast that the business will report sales of $2.08 billion, with estimates ranging from $2.06 billion to $2.09 billion. Zacks Investment Research’s sales calculations are an average based on a survey of research firms that that provide coverage for McAfee.

McAfee Corp. provides various integrated security, privacy, and trust solutions to consumers, small and medium-sized businesses, large enterprises, and governments in the United States and internationally. The company operates in two segments, Consumer and Enterprise. Its security technologies enable home users and businesses to stay ahead of the wave of fileless attacks, viruses, malware, and other online threats.

Read More: How to interpret the current ratio 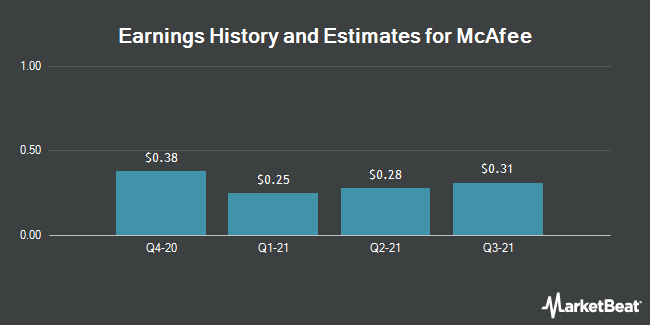 Receive News & Ratings for McAfee Daily - Enter your email address below to receive a concise daily summary of the latest news and analysts' ratings for McAfee and related companies with MarketBeat.com's FREE daily email newsletter.

Complete the form below to receive the latest headlines and analysts' recommendations for McAfee with our free daily email newsletter: