Victory Capital Management Inc. grew its position in shares of LifeVantage Co. (NASDAQ:LFVN) by 46.2% in the 2nd quarter, according to the company in its most recent Form 13F filing with the SEC. The firm owned 7,429 shares of the company’s stock after acquiring an additional 2,349 shares during the quarter. Victory Capital Management Inc. owned about 0.05% of LifeVantage worth $55,000 as of its most recent filing with the SEC.

LifeVantage (NASDAQ:LFVN) last posted its quarterly earnings data on Wednesday, August 18th. The company reported $0.31 earnings per share for the quarter, topping the consensus estimate of $0.20 by $0.11. LifeVantage had a net margin of 5.86% and a return on equity of 40.23%. On average, sell-side analysts expect that LifeVantage Co. will post 0.85 EPS for the current fiscal year.

LifeVantage Corp. engages in the identification, research, development and distribution of advanced nutraceutical dietary supplements and personal care products. The firm operates through the following geographical segments: Americas Region and Asia/Pacific and Europe Region. Its products include Protandim, LifeVantage Omega+ and ProBio, TrueScience and Petandim for dogs.

Want to see what other hedge funds are holding LFVN? Visit HoldingsChannel.com to get the latest 13F filings and insider trades for LifeVantage Co. (NASDAQ:LFVN). 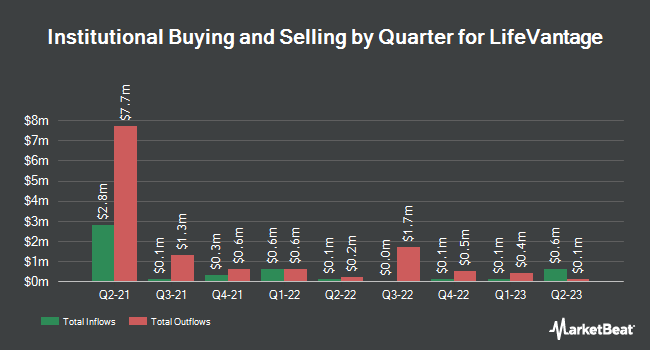 Complete the form below to receive the latest headlines and analysts' recommendations for LifeVantage with our free daily email newsletter: