Sempra Energy (NYSE:SRE) had its price target cut by analysts at KeyCorp from $143.00 to $141.00 in a report issued on Tuesday, Benzinga reports. The firm presently has an “overweight” rating on the utilities provider’s stock. KeyCorp’s price target would suggest a potential upside of 16.38% from the company’s current price.

Sempra Energy (NYSE:SRE) last posted its quarterly earnings results on Thursday, November 5th. The utilities provider reported $1.31 earnings per share (EPS) for the quarter, missing the consensus estimate of $1.52 by ($0.21). Sempra Energy had a net margin of 38.49% and a return on equity of 11.47%. The business had revenue of $2.64 billion for the quarter, compared to analysts’ expectations of $2.62 billion. During the same quarter in the previous year, the company earned $1.50 earnings per share. The business’s quarterly revenue was down 4.1% on a year-over-year basis. On average, sell-side analysts forecast that Sempra Energy will post 7.68 EPS for the current fiscal year.

Sempra Energy operates as an energy-services holding company in the United States and internationally. The company's San Diego Gas & Electric Company segment generates, transmits, and distributes electricity; and supplies natural gas. It provides electric services to a population of approximately 3.7 million and natural gas services to approximately 3.4 million of that population covering an area of 4,100 square miles.

Further Reading: What moving averages are used to define a golden cross? 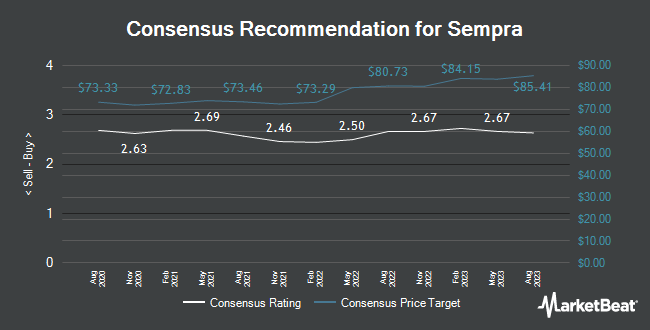 Lynch & Associates IN Has $1.43 Million Stock Holdings in Eli Lilly and Company

Complete the form below to receive the latest headlines and analysts' recommendations for Sempra Energy with our free daily email newsletter: