Microsoft Co. (NASDAQ:MSFT) CEO Satya Nadella sold 419,292 shares of Microsoft stock in a transaction that occurred on Monday, November 22nd. The shares were sold at an average price of $344.61, for a total transaction of $144,492,216.12. The transaction was disclosed in a legal filing with the SEC, which can be accessed through this hyperlink.

Microsoft (NASDAQ:MSFT) last announced its quarterly earnings results on Monday, October 25th. The software giant reported $2.27 earnings per share for the quarter, beating analysts’ consensus estimates of $2.08 by $0.19. Microsoft had a net margin of 38.51% and a return on equity of 45.80%. The firm had revenue of $45.32 billion during the quarter, compared to analysts’ expectations of $44 billion. During the same period in the previous year, the company earned $1.82 earnings per share. Microsoft’s quarterly revenue was up 22.0% compared to the same quarter last year. As a group, equities analysts expect that Microsoft Co. will post 9.16 EPS for the current fiscal year.

The business also recently declared a quarterly dividend, which will be paid on Thursday, December 9th. Investors of record on Thursday, November 18th will be given a $0.62 dividend. The ex-dividend date is Wednesday, November 17th. This is a boost from Microsoft’s previous quarterly dividend of $0.56. This represents a $2.48 dividend on an annualized basis and a yield of 0.73%. Microsoft’s payout ratio is 27.74%.

Microsoft Corp. engages in the development and support of software, services, devices, and solutions. It operates through the following business segments: Productivity and Business Processes; Intelligent Cloud; and More Personal Computing. The Productivity and Business Processes segment comprises products and services in the portfolio of productivity, communication, and information services of the company spanning a variety of devices and platform. 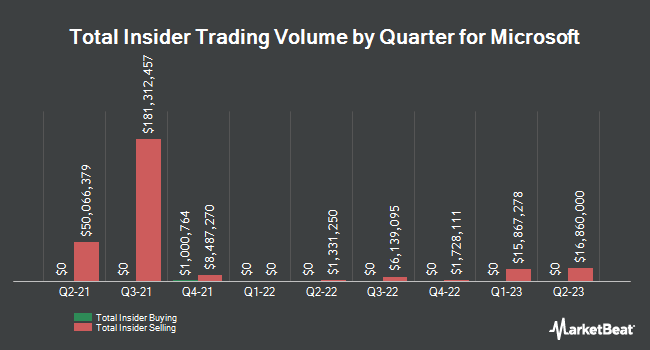 Bottos Trading Down 9.6% Over Last Week

Complete the form below to receive the latest headlines and analysts' recommendations for Microsoft with our free daily email newsletter: