Consolidated Edison, Inc. (NYSE:ED) CFO Robert N. Hoglund acquired 151 shares of the firm’s stock in a transaction that occurred on Wednesday, March 31st. The stock was bought at an average price of $74.80 per share, with a total value of $11,294.80. Following the completion of the acquisition, the chief financial officer now directly owns 42,669 shares of the company’s stock, valued at $3,191,641.20. The acquisition was disclosed in a document filed with the SEC, which is available at this hyperlink.

Consolidated Edison (NYSE:ED) last released its quarterly earnings data on Wednesday, February 17th. The utilities provider reported $0.75 earnings per share (EPS) for the quarter, missing the Zacks’ consensus estimate of $0.76 by ($0.01). The company had revenue of $2.96 billion for the quarter, compared to the consensus estimate of $3.06 billion. Consolidated Edison had a return on equity of 7.77% and a net margin of 11.06%. During the same period last year, the company earned $0.87 EPS. On average, analysts anticipate that Consolidated Edison, Inc. will post 4.2 earnings per share for the current fiscal year.

The business also recently disclosed a quarterly dividend, which was paid on Monday, March 15th. Stockholders of record on Wednesday, February 17th were given a dividend of $0.775 per share. This represents a $3.10 dividend on an annualized basis and a dividend yield of 4.12%. The ex-dividend date was Tuesday, February 16th. This is a boost from Consolidated Edison’s previous quarterly dividend of $0.77. Consolidated Edison’s dividend payout ratio is 70.94%. 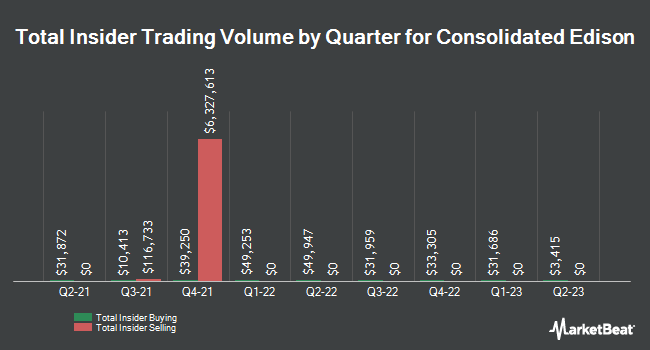 Quantstamp Trading Down 32.1% Over Last Week

Littelfuse, Inc. Given Average Recommendation of “Buy” by Brokerages

Complete the form below to receive the latest headlines and analysts' recommendations for Consolidated Edison with our free daily email newsletter: