Northland Securities began coverage on shares of GrowGeneration (NASDAQ:GRWG) in a research note released on Monday morning, Price Targets.com reports. The firm issued an outperform rating and a $55.00 price target on the stock.

GrowGeneration (NASDAQ:GRWG) last released its quarterly earnings data on Wednesday, May 12th. The company reported $0.10 earnings per share (EPS) for the quarter, topping the Zacks’ consensus estimate of $0.08 by $0.02. The company had revenue of $90.00 million for the quarter, compared to analysts’ expectations of $87.30 million. GrowGeneration had a net margin of 2.14% and a return on equity of 4.68%. The business’s revenue for the quarter was up 172.7% compared to the same quarter last year. Research analysts anticipate that GrowGeneration will post 0.15 earnings per share for the current fiscal year.

In related news, Director Sean Stiefel sold 8,305 shares of the company’s stock in a transaction that occurred on Thursday, April 15th. The shares were sold at an average price of $47.58, for a total transaction of $395,151.90. The sale was disclosed in a legal filing with the SEC, which can be accessed through this hyperlink. Company insiders own 13.57% of the company’s stock. 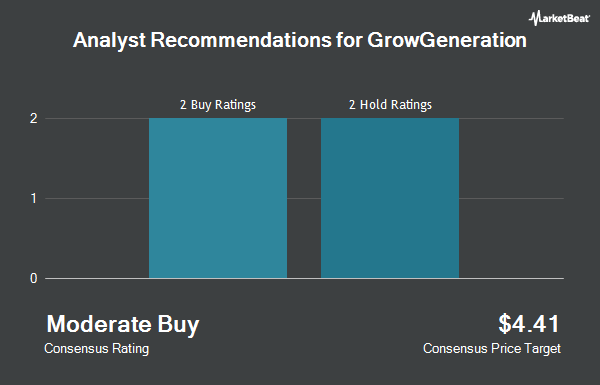 $3.05 Million in Sales Expected for PolarityTE, Inc. This Quarter

Complete the form below to receive the latest headlines and analysts' recommendations for GrowGeneration with our free daily email newsletter: