Editas Medicine (NASDAQ:EDIT – Get Rating) last issued its quarterly earnings results on Wednesday, November 2nd. The company reported ($0.81) earnings per share (EPS) for the quarter, topping analysts’ consensus estimates of ($0.87) by $0.06. Editas Medicine had a negative return on equity of 41.33% and a negative net margin of 784.32%. The business had revenue of $0.04 million for the quarter, compared to the consensus estimate of $5.86 million.

Editas Medicine, Inc, a clinical stage genome editing company, focuses on developing transformative genomic medicines to treat a range of serious diseases. It develops a proprietary gene editing platform based on CRISPR technology. The company develops EDIT-101, which is in Phase 1/2 clinical trial for Leber Congenital Amaurosis 10 that leads to inherited childhood blindness. 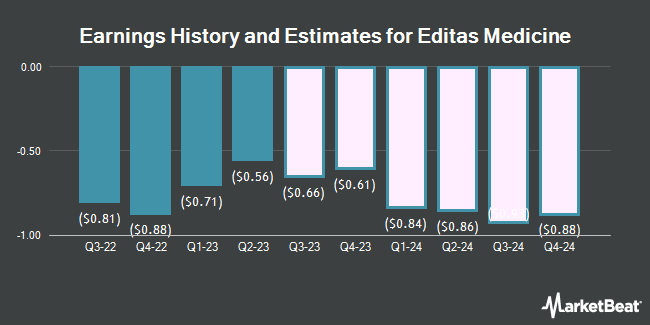 Complete the form below to receive the latest headlines and analysts' recommendations for Editas Medicine with our free daily email newsletter: