Semler Scientific, Inc. (OTCMKTS:SMLR) CEO Douglas Murphy-Chutorian sold 1,250 shares of the stock in a transaction that occurred on Monday, October 11th. The shares were sold at an average price of $129.01, for a total value of $161,262.50. The transaction was disclosed in a document filed with the Securities & Exchange Commission, which is available through this link.

Semler Scientific (OTCMKTS:SMLR) last released its quarterly earnings data on Sunday, August 1st. The medical equipment provider reported $0.83 earnings per share (EPS) for the quarter, topping the Thomson Reuters’ consensus estimate of $0.61 by $0.22. The firm had revenue of $14.31 million during the quarter, compared to analysts’ expectations of $14.53 million. Semler Scientific had a return on equity of 68.78% and a net margin of 43.39%. On average, research analysts anticipate that Semler Scientific, Inc. will post 2.82 EPS for the current fiscal year.

Semler Scientific, Inc engages in the provision of technology and software solutions to improve the clinical effectiveness of healthcare providers. Its multi-test service platform, WellChec, comprehensively evaluate its customers patients for chronic disease, including heart attacks and strokes, using its QuantaFlo product as well as other tests. 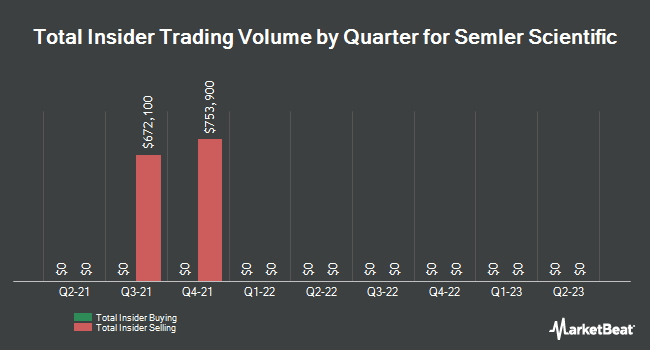 Complete the form below to receive the latest headlines and analysts' recommendations for Semler Scientific with our free daily email newsletter: