Splunk Inc. (NASDAQ:SPLK) CEO Douglas Merritt sold 27,526 shares of the firm’s stock in a transaction dated Thursday, September 16th. The shares were sold at an average price of $151.55, for a total value of $4,171,565.30. The sale was disclosed in a filing with the SEC, which can be accessed through this link.

Splunk (NASDAQ:SPLK) last posted its quarterly earnings results on Tuesday, August 24th. The software company reported ($0.62) earnings per share for the quarter, topping the Thomson Reuters’ consensus estimate of ($0.69) by $0.07. The firm had revenue of $605.74 million for the quarter, compared to the consensus estimate of $563.27 million. Splunk had a negative net margin of 49.60% and a negative return on equity of 55.19%. The company’s revenue for the quarter was up 23.2% on a year-over-year basis. During the same period last year, the firm posted ($0.33) earnings per share. On average, analysts expect that Splunk Inc. will post -5.71 earnings per share for the current year.

See Also: What is the accumulation/distribution indicator? 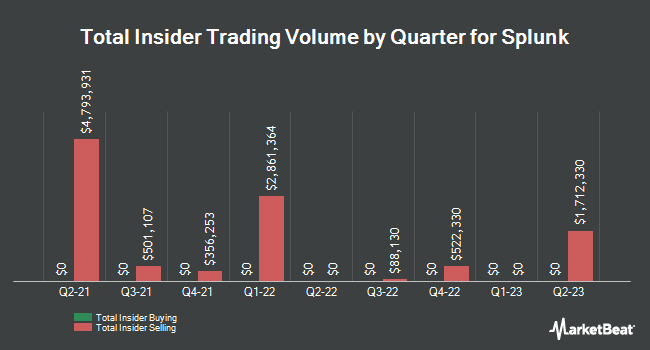 Receive News & Ratings for Splunk Daily - Enter your email address below to receive a concise daily summary of the latest news and analysts' ratings for Splunk and related companies with MarketBeat.com's FREE daily email newsletter.

Patria Investments Limited Given Consensus Recommendation of “Buy” by Analysts

The Joint Corp. Receives Consensus Rating of “Buy” from Brokerages

Complete the form below to receive the latest headlines and analysts' recommendations for Splunk with our free daily email newsletter: