Cleveland-Cliffs (NYSE:CLF) issued its quarterly earnings data on Thursday. The mining company reported $1.46 EPS for the quarter, missing the Thomson Reuters’ consensus estimate of $1.48 by ($0.02), MarketWatch Earnings reports. Cleveland-Cliffs had a positive return on equity of 10.98% and a negative net margin of 0.32%. The company had revenue of $5.05 billion during the quarter, compared to analysts’ expectations of $4.95 billion. During the same quarter last year, the business earned ($0.31) earnings per share. The business’s quarterly revenue was up 358.6% on a year-over-year basis.

Cleveland-Cliffs is the largest flat-rolled steel company and the largest iron ore pellet producer in North America. The company is vertically integrated from mining through iron making, steelmaking, rolling, finishing and downstream with hot and cold stamping of steel parts and components. The company was formerly known as Cliffs Natural Resources Inc and changed its name to Cleveland-Cliffs Inc in August 2017. 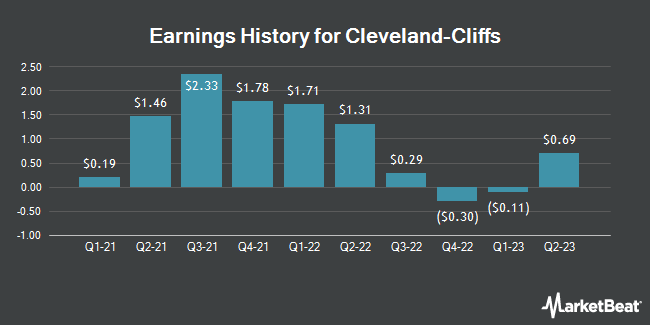 Complete the form below to receive the latest headlines and analysts' recommendations for Cleveland-Cliffs with our free daily email newsletter: