Canadian Western Bank (CWB.TO) (TSE:CWB) last posted its quarterly earnings results on Friday, December 4th. The company reported C$0.75 earnings per share for the quarter, beating the consensus estimate of C$0.73 by C$0.02. The business had revenue of C$236.58 million for the quarter, compared to analyst estimates of C$229.40 million.

In other Canadian Western Bank (CWB.TO) news, Director Elizabeth Gay Mitchell bought 4,000 shares of the stock in a transaction on Monday, October 26th. The shares were purchased at an average price of C$25.96 per share, with a total value of C$103,840.00. Following the acquisition, the director now directly owns 25,350 shares of the company’s stock, valued at approximately C$658,086. Also, Senior Officer Mario Vittorio Furlan sold 6,000 shares of Canadian Western Bank (CWB.TO) stock in a transaction that occurred on Wednesday, January 6th. The stock was sold at an average price of C$30.11, for a total value of C$180,660.00. Following the completion of the transaction, the insider now directly owns 17,934 shares in the company, valued at C$539,992.74.

The company also recently disclosed a quarterly dividend, which was paid on Thursday, January 7th. Stockholders of record on Thursday, December 17th were paid a $0.29 dividend. This represents a $1.16 dividend on an annualized basis and a dividend yield of 3.81%. The ex-dividend date of this dividend was Wednesday, December 16th. Canadian Western Bank (CWB.TO)’s payout ratio is 40.27%.

See Also: Does the Dogs of the Dow strategy work? 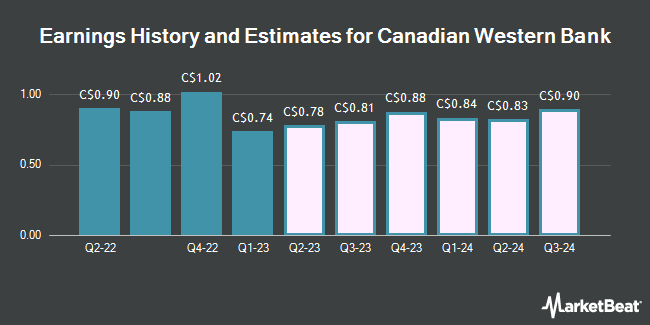 Complete the form below to receive the latest headlines and analysts' recommendations for Canadian Western Bank (CWB.TO) with our free daily email newsletter: